Color blindness is a condition impacting one's ability to see colors under typical lighting conditions or to perceive colors as they are typically seen. Generally, the disorder is present at birth, but it can also be caused by injuries or a variety of diseases of the eye.

The way we perceive colors is dependent upon the cones located within the retina of the eye. People are typically born with three kinds of cones, each perceiving different wavelengths of color. This is comparable to the wavelengths of sound. When it comes to colors, the length of the wave is directly associated with the resulting color. Short waves produce blue tones, middle-sized waves produce green tones and long waves produce red tones. Which pigmented cone is involved has an impact on the spectrum and seriousness of the color deficiency.

Red-green color vision problems are more frequent among males than in females because the genes are linked to gender and are recessive.

Color blindness is not a debilitating disability, but it can impair learning and development and work performance. Lacking the ability to see colors as peers do could immediately and negatively impact a student's self-confidence. For working people, color blindness could present a disadvantage when competing against colleagues in a similar industry.

Eye doctors use several tests for the condition. The most widely used is the Ishihara color exam, called after its inventor. For this test a plate is shown with a circle of dots in seemingly random sizes and colors. Within the circle one with proper color vision can see a number in a particular color. The individual's capability to make out the number within the dots of clashing colors indicates the level of red-green color blindness.

Even though genetic color blindness can't be treated, there are some steps that might improve the situation. For some, using tinted lenses or glasses which block glare can help people to see the distinction between colors. Increasingly, computer programs are being developed for common personal computers and for mobile devices that can assist people to distinguish color better depending upon their particular condition. There is also interesting research being conducted in gene therapy to enhance the ability to perceive colors.

The extent to which color vision problems limit an individual depends on the variant and severity of the deficiency. Some patients can accommodate to their condition by learning alternate cues for colored objects or signs. For example, many people can learn the order of traffic signals or contrast objects with reference objects like green trees or a blue body of water.

If you notice signs that you or a family member might be color blind it's advised to schedule an appointment with an eye doctor. The sooner the condition is diagnosed, the sooner you can help. Feel free to call our Cherry Hill, NJ eye doctors to schedule an exam. 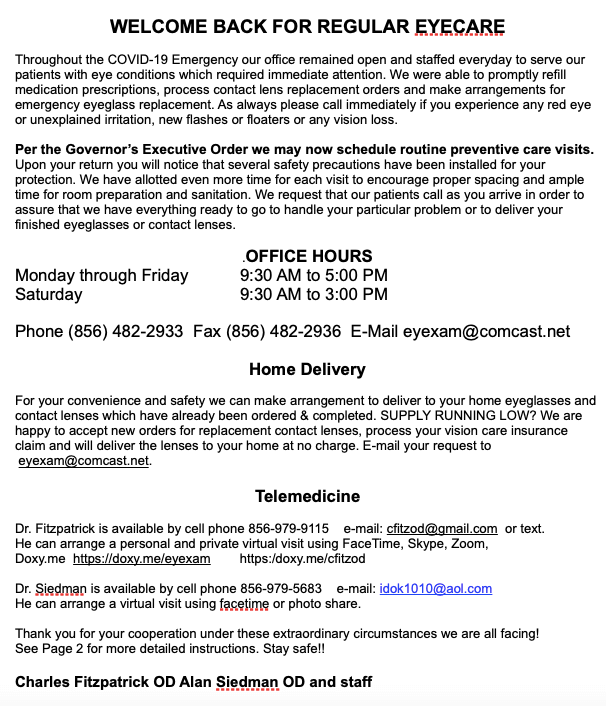 We now offer Online Billpay for your convenience!